Lake, Local News, WiLD 102THE FIGHTING NORTHERN PIKE OF LAKE OF THE WOODS

THE FIGHTING NORTHERN PIKE OF LAKE OF THE WOODS

It is known that Lake of the Woods has an amazing walleye fishery but some are unaware about the Fighting monster Northern Pike that roam the lake. The pike add another level of excitement about what else can come up a fish hole. Pike

have been seen in so many different areas on the vast lake. They have been found in back bays by tip up and spearing anglers, in the river, back bays, deep holes, reefs, and the main lake. They have been spotted lying and waiting mere feet under the ice for fish released by anglers or even following up walleyes being reeled in.

The northern pike is a species of carnivorous fish. They are typical of brackish and fresh waters of the Northern Hemisphere. They are known simply as a pike in Britain, Ireland, and most of Canada and the United States. Pike can grow to a relatively large size: the average length is about 40–55 cm (16–22 in), with maximum recorded lengths of up to 150 cm (59 in) and published weights of 28.4 kg (63 lb). The Fighting is the word to use when catching these great fish. You might think you’ve snagged a log as you’re trolling the waters, however, you might just have a six inch northern pike on that battles all the way into the boat. These fish feed on smaller fish in the waters and often times you will find those half eaten fish inside the pike that has been bitten by those huge teeth. You DO NOT want to get your finger anywhere near that mouth because those teeth are treacherous.

Many people in this north country debate whether the northern pike is good eating or not. This writer would say that this specie of fish is delicious as it come out of the cool waters especially in the spring and late fall.  The drawback of this great eating fish is that it has a huge amount of bones. Seasoned guides are the ones who know how to filet those fish just right to eliminate as many bones as possible, but one still has to be careful while enjoying the great taste.

Early ice season when the bays are frozen and safe a couple resorts will put out spear houses in Bostic Bay and Zippel Bay. Bugsy’s on Bostic and Zippel Bay Resort are known for having spear houses out for that early ice and to target some giant Pike. Locals will also put spear houses out on the edge of bays of the river and lake to find these big toothy critters. We suggest using an outfitter as they are out checking ice daily, monitoring ice conditions, and staking trails. Safety and caution is very important.

The first ten days in December are extremely popular and productive when weather allows it. Spearing starts November 15 and continues through February. Found along the shallow bays, the northern pike at Lake of the Woods are of trophy proportions.

As the winter progresses many of the pike scatter onto the lake while some stay in the bays. Many of the pike can be caught near or on reefs feeding. Some anglers will put a tip up out as there second line.

Come March or the end of the winter season bays are loaded with tip up anglers as they are all hoping for that big one to swim by and hammer their bait. 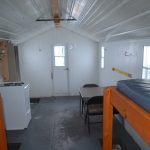 Previous Story:
WINTER ADVENTURE: SPEND THE NIGHT ON THE ICE 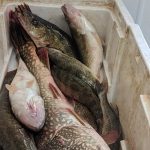