Local News, Roseau StarSalt Contamination, Wolves, Trail Grooming keep the commissioners on their toes at the April 23 Regular Board of Commissioners meeting.

Salt Contamination, Wolves, Trail Grooming keep the commissioners on their toes at the April 23 Regular Board of Commissioners meeting.

The Roseau County board met in regular session April 23. The commissioners discussed their letter of support for removing timberwolves from the protected species list, an ongoing lawsuit against the county, and the largest construction project ever approved by the county.

Next, the board approved the creation and hire of a new position within the Social Services Department. The Family-Based Services Provider position will work directly in the home to reduce the incidence of abuse and neglect and to prevent or shorten out-of-home placement.

After the consent agenda items were passed, County Engineer Brian Ketring spoke about the largest construction project in county history — County road (CR) 9. Three bids were received for the project.

That’s 3.1% over the estimate, but beating the second lowest bidder by approximately $17,000. Knife River Corporation is based out of Bemidji. This project will be paid for using state money collected from the gas tax.

The project is on a 7.25 mile stretch of CR 9 from Skime to the river north of Hayes Lake Road. The section will be lowered, shifted slightly to the west, and will be resurfaced with a geo-grid netting between gravel layers to increase strength. The improvements will turn that section of CR 9 to a 10-ton road with the rest of CR 9 remaining a nine-ton road.

There will be a detour in place with local traffic only being allowed during construction. Construction will begin mid-June and be completed by the end of the year.

The board approved the contract to Knife River and moved on to an update on a lawsuit against the county.

County Coordinator Jeff Pelowski had and update on a file for a summary judgment made in a case brought against the county by the Magnusson farm for $1 million in damages from salt contamination from the county’s salt storage shed over the winter. The county was hoping to have the case thrown out during summary judgment based on four parts. Three of these parts were not awarded summary judgement and would be left to a jury to decide.

Part one was based on immunity as a salt shed is part of doing business, but this part also included the conduct of employees and whether they used diligent care in loading and unloading salt. This is left for a jury decision.

Part three was a nuisance claim. The court found there was a viable claim for nuisance and that would be left for a jury.

The part that was granted in favor of the county was on a trespassing claim. This ruling means that damages are limited to the loss in value to the land. The land is valued at $9,000.

To date the county has spent $110,000 in legal fees on this case. The court date has been set for Sept., unless a settlement is reached earlier.

The board then shifted gears to a discussion about the protective status of the grey wolf. The county has drafted a letter of support for the delisting of wolves and the implementation of a hunting and trapping season in Minnesota — noting Minn. DNR also supports the delisting of timberwolves in the state.

There is a discrepancy between state and federal law on the issue of shooting a wolf to protect yourself or livestock. State statute allows a person to protect themselves or livestock from a wolf, however the federal government does not allow for that stipulation. The board passed a resolution to send their letter of support for delisting to U.S. Fish and Wildlife service.

Wrapping up with committee reports, Commissioner Horner reported that he attended the Warroad city council meeting and learned of a Tax Increment Financing district being created for a $7.4 million Hampton by Hilton hotel along the river in downtown Warroad, at the location of the old school building.

That is an 11-month project that is expected to start in June. It would be a four-story hotel with 72 rooms, comparable to the Hampton built in Bemidji, that will employ 14 workers full time. 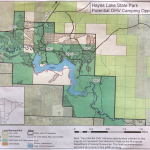