A chariot of angels descended upon Baudette, May. 31, 2020 to escort Rhoda Giles Laughy on her heavenly journey. Waiting and singing gloriously were; her husband, John Laughy, mother Lillian Cochran Giles, father Lloyd Giles, brother George (Violet) Giles and sister Majorie (Ray) Stepnes; Three daughters Kathryn Gruben Pranke, Garnet Smith and Joan Undahl. Sons-in- Law; Norman Undahl, Ulysses Smith, Gary Pranke and Roger Gruben. I remember Mom and Dad dancing and when I heard that the last song mom heard was “I Want to Stroll Over Heaven With You” by Alan Jackson, I just knew when mom and dad met once again they danced across Heaven as their Heavenly Family watched. What a fantastic re-union!

Descendant from a Scottish Sea Captain, the hard working and steady pioneer stock of the Red River Settlement of North Dakota and Canada; the rugged French-Canadian trappers and Metis ancestry, Rhoda L Giles Laughy was born July 25, 1914 at Drayton, North Dakota. Second child of Lloyd and Lillian Cochran Giles, brother George and sister Marjorie Stepnes made up the family. She also leaves a half sister Eileen Harpell. Her passing, ends the last of her generation, leaving the next teetering on the edge to do as well as they can without her love and guidance.

Rhoda married John Laughy, June 6, 1936 in Warroad, Minnesota. Making their home on a farm in Baudette, they raised five daughters, Marjorie Joan Undahl, Maureen Laughy, Garnet Smith, Carol Mattison and Kathryn Gruben Pranke. With hard work, faith, love and tribulations their girls had a good start when they were ready to continue on with their own lives.

As empty nesters, John and Rhoda first moved to Minneapolis, Minnesota, then to Vacaville, California to be near daughter Kathryn and Lillian Giles. After John died in 1979, Rhoda and her mother continued to live together until Lillian’s death in 1991. When Kathy died in 2011, Rhoda moved to Lewiston, Idaho, living near Garnet until Garnet’s death in 2014.

In 2015, Rhoda once again came home to Baudette. Great-grand daughter Izzy Calvin helped with this move and was happy to tell one and all about her 100 year old Grandma Laughy. Every tourist heard about MOM, per Izzy. Rhoda resided at the CHI Care Center fully enjoying the care, activities and visits from old and new friends and family. At her 105th birthday in 2019, a party of over 100 people helped her celebrate the day. Even five American Legion bikers from Wisconsin came to sing and wish her Happy Birthday.

Rhoda worked as a secretary for Works Process Administration (WPA), St. Joseph Hospital and Lake/Woods Farmers Home Administration in Baudette. In Minneapolis she worked for the Bankruptcy Court and California, the Army Reserve. She was a member of the Retired Federal Employees, Moose Lodge Life Member, (IGAS) International Graphoanalysis Society, and the Linwood Laughy American Legion Auxiliary (named after her brother-in-law).

Her interest in Handwriting Analysis (IGAS) lead to lecturing, teaching and entertaining others. Her family was often reluctant to write letters in case she analyzed them but she never did. She just enjoyed the news of the family and information each letter gave.

Rhoda’s interest in genealogy had her interviewing family members. Multi-able notepads, calendars, slips of paper, along with yearly journals stored information. At every reunion or gathering Rhoda was making notes of talked about tidbits, leaving behind a store of personal information and stories from each family member she could corner. The stories she could and did tell kept all entertained at each gathering.

Rhoda traveled around the US, Hawaii, Alaska, and Canada, keeping a journal of each trip. An East Coast trip in her 80s found her driving a Duck Boat into the ocean. Never one to say no to an outing, she went ice fishing up until she was 105. “If the bus leaves, I am on it” she stated to one and all.

Arrangements for a funeral and interment will be posted at a later date.

In lieu of flowers donations can be made to: Baudette Depot, Linwood Laughy American Legion, Lake/Woods County Historical Museum or a non-profit of your choice. 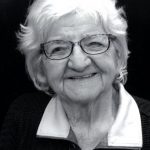