RAINY RIVER RECOVERS THANKS TO REGULATIONS AND PARTNERSHIPS

The Rainy River is a success story.  It acts as the international border between the U.S. and Canada all the way from Rainy Lake where it empties out all of the way to Lake of the Woods, a lake in which it feeds 70 + miles downstream.  This beautiful river is known to most for it’s world class fishing opportunities.  Walleyes running up from the lake in the spring and fall.  Massive Lake Sturgeon which have made a huge recovery over the years.  Perhaps none of this would have been possible without the many changes that took place to clean up the river.

The below article is a re-print from the Minnesota Pollution Control Agency and highlights the success story of the Rainy River. Minnesota Health Department researchers in the 1950s had to dig down through paper mill waste clogging the Rainy River to find the water.

In an era of flashy quick fixes, the Rainy River is a story of how slow and steady wins the race. Once one of the most polluted rivers in the state, the Rainy River now boasts “good to excellent” water quality.

Back in the 1950s, the Rainy River was so choked with industrial wood waste and raw sewage, one had to dig several feet to hit water. Now the Rainy River supports drinking water, fishing, tourism, and recreation.

Reading a new report by the Minnesota Pollution Control Agency (MPCA) on the health of the river, another idiom comes to mind: “Many hands make light work.” This story of recovery came via efforts of many agencies and environmental legislation in both Canada and the United States. For more than 50 years, the two countries have collaborated to restore and protect water quality.

“The Rainy River is a vital economic and cultural bond between the United States and Canada,” says MPCA commissioner Laura Bishop. “With all partners working together — including federal, state, and local governments, Tribal Nations, industry, and environmental advocates — we have moved the river from near total destruction to one of the most treasured fishing spots in North America that is also integral to the health of economies on both sides of the border.”

Though it would take several decades to turn the Rainy River around, two pieces of legislation set the river in the right direction: Canada’s Environmental Protection Act in 1971 and the United States’ Clean Water Act in 1972. In addition, the International Joint Commission established the International Rainy River Water Pollution Board to assist the two countries to address pollution in the Rainy River. By the early 1980s, pollutants had dropped dramatically on both sides of the border.

“The improvements that we have seen in the Rainy River demonstrate what can be accomplished when our two countries collaborate, in this instance by working together in the International Joint Commission’s International Rainy-Lake of the Woods Watershed Board, to achieve shared objectives,” said Ariel Delouya, Consul General of Canada in Minneapolis.

The Rainy River is now considered a world-class fishery, and one of the top five places in the U.S. to catch a 10-pound walleye or a four-foot or larger sturgeon. Other aquatic life, such as insects that provide food for fish and birds, are also doing well. 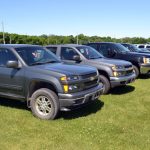 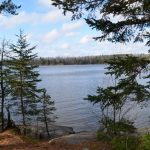 Next Story:
EXPERIENCE FALL UP AT THE NW ANGLE