Lake, Local News, WiLD 102MTT WRAPS UP WITH CHAMPIONSHIP ON LAKE OF THE WOODS

MTT WRAPS UP WITH CHAMPIONSHIP ON LAKE OF THE WOODS

When you chat with anglers who fish the MTT (MN Tournament Trail) walleye tournament, there have been a lot of memories throughout the year.  But in many cases, the tournament has been on the radar screens of most is the championship that takes place at Lake of the Woods this week.  Thursday and Friday, September 17 – 18, some of the best anglers in the state will be competing for a new boat, prizes and of course, cash prizes.

This tournament is special for a number of reasons.  First off, anglers are fishing for the all new redesigned 2021 Skeeter WX1910 Throughout the year, anglers competed on a variety of lakes and rivers in MN to qualify for the championship including the Lake Mille Lacs, Lake Winnibigoshish and Lake of the Woods.  Big Stone in early May was canceled due to COVID-19.

Like many things in life this year, tournament organizers had to adapt to this year’s new normal.  The tournament championship would normally be a traditional format in which anglers would bring their walleyes to the scales each of the two days for weigh ins.  This year due to COVID-19, the MTT went with the PRT format exclusively, or Photo Release Tournament.

This really changes the strategy.  In the past on Lake of the Woods, fish over 28 inches were always golden to the overall weight, but fish just under the slot limit that must be released of 19.5 – 28″ were also very valuable.  With the PRT format, even slot fish can be photographed, recorded and released.  This changes the fish targeted in many cases.

This format has become popular with many as fish are immediately released vs being in a livewell all day greatly reducing mortality. The MTT is run by Mike and Renee Holt.  Mike Holt appreciates Lake of the Woods for the championship for a number of reasons.  “First off, anglers love the lake, it is good fishing and there is a variety of lodging.  If the lake is rough, there is about 40 miles of navigable water on the Rainy River to fish.  During mid September there are often quality walleyes to be found in the river.  Finally, regardless of how a team has done on the first day of the two day tournament, you are never out of it as there are monster walleyes in the system.  Two big fish on day two makes up for a tough day one.” Good luck to all MTT anglers who are competing in this week’s MTT Championship.  This is the time of the year when dreams come true! 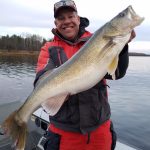 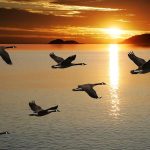 Next Story:
BREATHTAKING FLOCKS OF GEESE