Minnesota Senate Republicans have chosen Sen. Jeremy Miller, of Winona, to be the chamber’s new majority leader to replace Paul Gazelka, who stepped down from his leadership post to run for governor. Senator Mark Johnson of East Grand Forks was serving that position on a fill-in basis until a decision had been reached.

Amazon officials say the first day of operations at the company’s new warehouse in Fargo will be on Sept. 19. The 1.3 million square-foot Fargo Fulfillment Center had been under construction for nearly a year.The building, which is located on 110 acres of land, is believed to be the largest in North Dakota. KVRR-TV reports that construction costs have been estimated at $100 million to $120 million. Amazon wants to hire about 1,000 fulltime, hourly workers in Fargo with a starting wage of $15.00 per hour.

Minnesota Sen. Amy Klobuchar says she has been treated for breast cancer and the treatment “went well.” The 61-year-old says Thursday that the cancer was found in February during a routine mammogram, and she had a lumpectomy to remove it. She says she completed radiation treatment in May, and a checkup in August found she was doing well. Klobuchar says her cancer was stage 1A, meaning it had not spread beyond the breast.

THE MINNESOTA DEPARTMENT OF EMPLOYMENT AND ECONOMIC DEVELOPMENT WILL BEGIN ACCEPTING APPLICATIONS FOR THE MAIN STREET COVID RELIEF GRANT PROGRAM ON SEPTEMBER 20TH. THAT IS FOR MINNESOTAN OWNED AND OPERATED BUSINESSES THAT CAN SHOW FINANCIAL HARDSHIP DUE TO THE PANDEMIC. IN TOTAL, THERE IS ROUGHLY $32 MILLION DOLLARS EACH FOR GREATER MINNESOTA AND THE TWIN CITIES METRO AREA. GRANTS ARE FOR BETWEEN $10,000 AND $25,000.

A MEMORIAL SERVICE FOR EDNA I. FREISNER OF WARROAD WILL BE HELD TOMORROW (1 PM) AT HELGESON FUNERAL HOME IN WARROAD. VISITATION WILL BE HELD ONE HOUR PRIOR, WITH INTERMENT AT RIVERSIDE CEMETERY IN WARROAD. EDNA FREISNER WAS 87.

FUNERAL SERVICES FOR ANNIE RYGH OF WANNASKA WILL BE HELD ON TUESDAY (11 AM) AT RIVERSIDE LUTHERAN CHURCH IN WANNASKA. VISITATION WILL BE ONE HOUR PRIOR. ANNIE RYGH WAS 97.

IF YOU’RE LOOKING FOR SEASONAL EMPLOYMENT, IT’S NEARLY SUGAR BEET HARVEST TIME IN THE RED RIVER VALLEY. THIS YEAR FARMER’S ARE USING AN ONLINE “HARVEST HELP” PORTAL TO FIND WORKERS. THE RED RIVER VALLEY GROWERS ASSOCIATION SAYS UP TO TEN THOUSAND PEOPLE ARE NEEDED JUST ON THE FARM SIDE OF THINGS TO PULL OFF A SUCCESSFUL HARVEST. THE REGION REPRESENTS 37% OF THE ENTIRE US SUGAR BEET CROP.

STATE OFFICIALS HAVE ANNOUNCED PLANS TO REOPEN DRIVER’S LICENSE EXAM STATIONS TO FULL CAPACITY STATEWIDE BY EARLY NEXT YEAR. REPRESENTATIVE JOHN BURKEL CALLED IT “VERY WELCOME NEWS” FOR GREATER MINNESOTA. AT ONE POINT IN THE PANDEMIC, THE STATE HAD CONSOLIDATED THOSE SERVICES TO ONLY 14 LOCATIONS, CURRENTLY 26 LOCATIONS ARE OPEN. SOME LOCATIONS WILL NEED TO RENEW LEASES OR FIND A NEW LOCATION, AND THE DVS FACES A SIGNIFICANT HIRING CHALLENGE TO MEET THEIR MID-JANUARY TARGET. 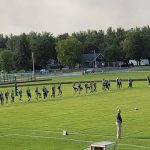