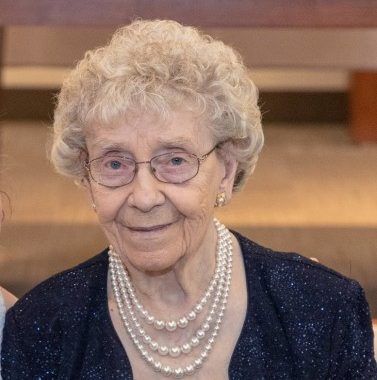 A Mass of Christian Burial for Leonella D. Kotta of East Grand Forks, formerly of Roseau, MN will be held on Saturday, February 12, 2022 at St. Phillip’s Catholic Church in Falun at 10:30AM. Visitation will take place on Friday, February 11, 2022 from 5-7PM with a prayer service at 7PM at Helgeson Funeral Home in Roseau, MN. Burial will take place at St. Philip’s Catholic Cemetery at a later date.

Leonella Delores (Taus) Kotta passed away peacefully at the age of 93 in Valley Senior Living in Grand Forks.

Leonella was born February 21, 1928 to parents William F. Taus and Katherina (Kasprick) Taus, among the youngest of their twelve children. She attended Grasslake School. She met Phillip A. Kotta when her father, William, was building a house for Phillip’s parents. She and Phillip were united in marriage April 16, 1947 in Benwood, MN. Together they managed their family farm in Falun Township raising small grains and milking one of the largest herds of dairy cattle in Roseau County at that time.

Leonella was a force to be reckoned with in the kitchen. She often fed a dozen or more people around her kitchen table, baking 20 loaves of bread twice a week and raising and canning produce from her huge garden. Many neighbors and friends heard her say she would fix “a little lunch” before they could leave her home. Her expertise in the kitchen led to jobs cooking and waitressing at places like the Grasslake School, CoEd Cafe in Badger, the Encore and Nelson’s Cafe in Roseau. While she was doing this, she was also Phillip’s right hand on the farm. She milked cows and ran the farm while Phillip was away working in the woods. She could also run any piece of equipment on the farm; and often did. Leonella also spent many years balancing clutches at the Polaris factory in Roseau beginning in their years with Textron. She retired in 1993.

Leonella loved her family fiercely. She took in two nephews when their parents, her sister Clara and husband, were tragically killed in a car accident, adding to the six children she was already raising. She also helped to feed and care for her bachelor brothers-in-law and widowed father-in-law for many years. Her children, and eventually grandchildren, were the center of her life. In later years, she and Phillip were blessed to travel with their daughters to Yellowstone, the Grand Canyon, Sequoia National Park, the Hoover Dam and Disney World in Florida, where their youngest worked.

Never one to sit idly by, she crocheted amazing doilies and often gifted them to family and friends. She also sewed and spent many hours outside in her gardens, especially loving her raspberries and flowers. The altar of St. Philip’s Church in Falun was often graced by the bouquets she brought from home. She and Phillip were life-long members of St. Philip’s Church. She loved to play Whist, and was always thrilled when she could take home a prize from a card party. After moving into Assisted Living, she took this penchant for prize-winning to their weekly Bingo games.