ICING WALLEYES IN A NEUTRAL MOOD

Have you ever heard someone say, “Yesterday we couldn’t keep them off of the hook.  I wonder what happened?”  There are a lot of things that could have happened that changed the bite and caused walleyes to go into a neutral mood.  Regardless the reason the walleyes decided eating isn’t on the top of their list on any given day, there are some things an ice angler can do to get neutral mood walleyes to eat.

Why do walleyes get into a neutral mood?  When it is all said and done, only Mother Nature truly knows.  One phenomenon that happens often that changes the bite is changing weather, even if it’s Lake of the Woods.  One of the weather patterns that has known to make the bite shut down is an approaching cold front. Another reason we believe walleyes get into a neutral mood is quick temperature changes, either warmer or colder.

It is also believed walleyes don’t eat every day, especially during the winter when their metabolism slows down vs warm water periods.  If they are full, sometimes your offering just wont entice them as they are in that neutral mood.

Another tough time to turn walleyes is when there is just too much bait around.  The thought is having a buffet non-stop takes the urgency away and creates a neutral mood.

It all sounds like doom and gloom for an ice angler looking to catch walleyes.  No worries!  There are things you can do to still be productive and catch more fish when walleyes are in a neutral mood.

When walleyes get into a “funk” or a neutral mood, no worries, there are things you can definitely do to still make it a good day on the ice.  Time to implement your special “neutral mood walleye” techniques to implement to catch more fish.  Try downsizing, getting the reaction strike and slowing down, all of which can put more walleyes and saugers into your bucket! 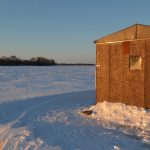 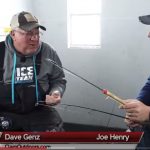 Next Story:
A RECENT DAY OF ICE FISHING WITH DAVE GENZ...