GROUSE HUNTING LAKE OF THE WOODS

Grouse hunting season starts back up on Saturday September 19th! Lake of the Woods is known for its walleyes but the grouse numbers are phenomenal in the area. With hundreds of thousands of public land even the most avid grouse hunter will never run out of land to hunt. There is an area just to the west of Baudette, Beltrami Island State Forest has thousands and  thousands of acres of land, dirt roads, ATV trails and walking trails which is very good grouse habitat. There is so much habitat and such a variety of habitat that grouse have everything they want and need to flourish.

Whether you own a dog or not, grouse hunting success can be had by all. The grouse boom to bust cycle is continuing its cycle up and the numbers are great.  Getting off the trail is key to getting more flushes in this area. Not many hunters will go break brush so many of the birds go unseen and don’t flush.

It seems there are two criteria very important for grouse hunters looking to bag some “chickens of the northwoods”.   First is the availability of public hunting land.  The second, a lot of grouse.

There is an area just to the west of Baudette that has both.  Beltrami Island State Forest is an area with thousands of acres of land, dirt roads, ATV trails and walking trails which is very good grouse habitat. There is some much habitat and such a variety of habitat that grouse have everything they want and need to flourish.  That means success for would be grouse hunters. Getting out with some friends in the forest during a grouse hunting season Typically does not disappoint.  Most hunters shoot mainly ruffed grouse with a couple of spruce grouse thrown in.  With such a beautiful area, hunting is a success from just the sheer beauty and getting out into the woods.

The area offers 3 different type of grouse along with snipe.  The Ruffed Grouse is by far the most popular and to most hunters, tastes the best.  Some say it is the best eating game bird out there, but of course that is personal opinion.

The second type of grouse is the spruce grouse.  As a rule, ruffed grouse and spruce grouse roam the same type of habitat.  Spruce grouse prefer more of the coniferous forest or pine trees.  The meat is darker than a rough grouse and some consider it a stronger or “piney” taste.  There are a few in the north country who enjoy a good spruce grouse.

The third variety of grouse around Lake of the Woods is the sharp tailed grouse.  Sharpies primarily hang out in more agricultural settings, hence, are a bit more challenging to target as private land is best.  It is also helpful to have an idea where the sharpies are living as there are tens of thousands of acres of farmland across the Lake of the Woods region.

As The Walleye Capital of the World, Lake of the Woods is known for it’s fishing.  Consequently, grouse hunting does not garner the attention.  Many, however, have discovered an area off the radar screen to most that is absolutely a hunting gem.  There is a huge amount of quality public hunting land, lots of birds and fewer hunters.

The ability to go smack a limit of walleyes and enjoy ruffed grouse hunting in the same area the same day is enough to get sportsmen and sportswoman blood pumping. Fall is a a neat time up at Lake of the Woods.  A combo of great fishing and hunting speaks highly of the wonderful natural resources in this neck of the woods.  Grab your shotgun and head north to hunt grouse at Lake of the Woods. 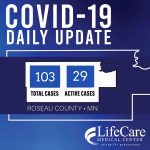