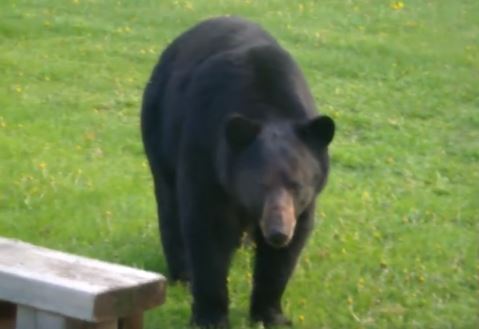 BLACK BEARS AROUND LAKE OF THE WOODS

Wildlife is abundant in Lake of the Woods, well part of our title is woods after-all. Black Bears are one of the many majestic creatures to be roaming our lands. An estimated 12,000 – 15,00 reside in Minnesota. Acres and acres of forested land from the South Shore to the NW Angle allow for bears t o call home. Hopefully on your next trip you will catch a glimpse of one!

Black bears are omnivorous meaning they eats both plants and meats. This ranges from fruits, nuts, and honey to fish, ants, and sometimes even your garbage. They are extremely adaptable though they primarily will reside in high forested areas with ground vegetation. You may see them scrounging in an open field occasionally. They will travel 15-80 miles, usually returning to their summer home each year. They are typically solitary animals unless you catch a mama with her cubs.

Females give birth to up to 6 (most commonly 2-3) cubs. They will hibernate for up to 6 or 7 months in the winter and give birth during this time. Newborn cubs will not hibe rnate but will stay with mom until venturing out usually early April depending on weather. Dens can consist of anything from a hole in a tree trunk, to a cave, or a brush pile. Cubs will stay with their mom for a year and a half and hibernate that year with their mom, though they are weaned after 7-8 months. Black bears are prevalent around the lake.  You might see them crossing the road, in a field or swimming between islands.  They are a true sign you are up north and amongst nature.  Here is a black bear a resort caught on video while they were fishing.  It is not uncommon for visitors to see bears swimming between islands or while traveling some of the back roads while on a scenic drive in the area.

Hunters coming to Lake of the Woods enjoy literally hundreds of thousands of acres of public hunting land as well as a strong population of bears. Not considered dangerous, all wild animals need their space and respect.  We encourage you to enjoy the area black bears from a safe distance! 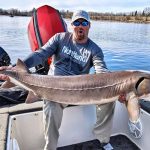 Next Story:
SENSATIONAL STURGEON ON THE RAINY RIVER