AIM WALLEYE MN CHAMPIONSHIP ON LAKE OF THE WOODS RECAP

64 teams had their sights on winning the MN Championship of the AIM Walleye Weekender Series MN Championship, but only one could claim the title, champion.  Teams put up big weights and the competition was strong, but this year’s winners were Bob and Hunter Nitti, an uncle / nephew duo with a two day, ten fish weight of 88.24 lbs.  That is an 8.82 lb average per walleye!  Impressive to say the least.

In a post tournament interview hosted on the AIM Walleye Facebook page, the winners had a certain crankbait with specific colors dialed in.  After losing that crankbait that was most effective and having no others available, Hunter went on a hunt.  He called and drove to many bait shops, tackle stores, etc looking for this specific bait.  With no luck, he finally resorted to purchasing spray paint and doctoring up the lures himself.   His fishing buddies said it would never work.  After testing it out prefishing that first morning after the paint dried, he boated a 30 inch walleye.  As the story goes, a short video was sent to those skeptics, out of fun of course.

Nobody knows what that special lure nor the color combination was.  It was said anglers were looking at Hunter’s hands at the championship weigh in for some clues on the colors, but that paint had already worn off.

Even for great walleye anglers, the opportunity to win a championship tournament of this caliber is special.  The sun, moon and stars have to align for sure.

Think about the details.  Working with a small group of anglers as a team sharing information.  Breaking down what lures, size, color, speed, area are getting the best bites.

Regardless of how “dialed in” an angler is, one still needs the “luck” factor.  Luck in the sense of getting your presentation delivered to the right fish.  The luck of hooks not popping out when reeling a big walleye in big waves that is shaking it’s head and running hard when it gets close to the boat.  Many anglers talked about big fish getting un-buttoned right at the boat.

This championship win also secured Team of the Year honors for the duo who are no strangers to fishing tournaments throughout Minnesota.  Congratulations!!! Jeff Holz and Andy Hage with their 2nd place plaques. Lake of the Woods as a fishery had the chance to show off it’s strong reputation and healthy population of big walleyes to the AIM Walleye anglers.  The tournament is a catch, record, release format meaning, anglers will catch the walleye, take a picture of it on the bump board or ruler issued by the tournament with a second picture a hero shot showing the markings of the walleye to ensure that same fish is not used a second time.  This format means slot limits for lakes, including the slot limit on Lake of the Woods is not in play as fish are released.

This style of tournament is also popular as the walleyes are returned to the fishery will little mortality vs fish in livewells all day.

A big thank you to all AIM walleye anglers, staff and participants for coming up to Lake of the Woods.  During a strange year in so many ways, the tournament went on, memories were made and once again, a champion was crowned.

Previous Story:
WHEN WILL THE SHINERS RUN? 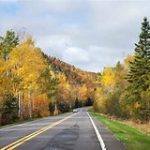 Next Story:
BREATHTAKING FALL COLORS AT LAKE OF THE WOODS